So I know I haven’t mentioned this before (ha), but not even a week ago I moved into a dorm to start my, well, second semester of college. My roommate and I are pretty well settled and, despite the lack of air conditioning in a Midwest summer, we’re decently set. 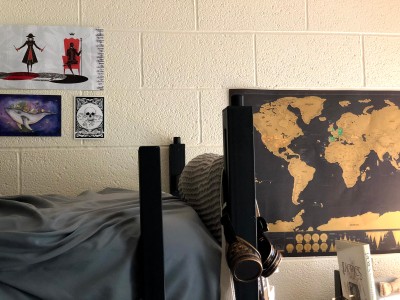 Even for a dorm, our room is decidedly small- barely a hundred square feet, not including the closets. We lofted our beds and shoved dressers into the closets to make more space, and for what it’s worth it feels a lot more like two or even three rooms than just one.

Beneath my roommate’s bed, we have a futon that fits pretty much perfectly when paired with her bookshelf as a half-end table, half-extra storage space. In front of that is a rug with the coffee table I built in Wisconsin. This works half as a drying rack for dishes (we use a dishtowel as a tablecloth) and half as a surface where we keep a teapot and three LED candles. No real candles allowed, unfortunately! 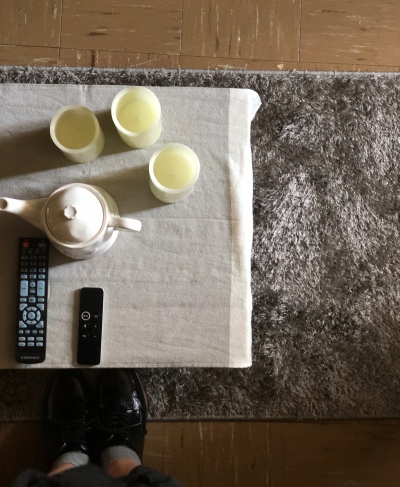 Underneath mine is a TV, our Keurig and tea/coffee station, food storage, and a bookshelf. This is possibly my favorite part of the room, though honestly, it’s difficult to tell. Alas, there wasn’t enough room for a bookshelf that actually got natural light so the shelfies are not going to be as nice as they were at my parents’ house. 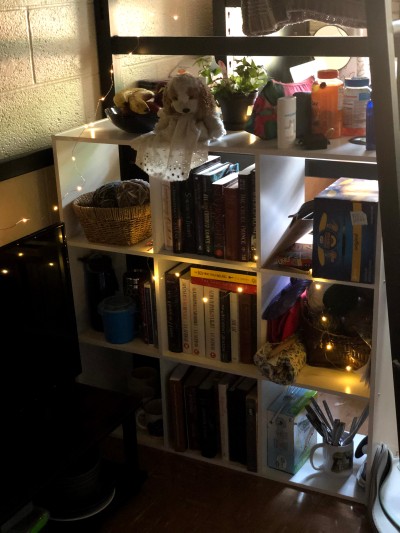 My workspace is yet another contender for favorite-space. I don’t have any of my textbooks yet, but even then I’m planning to store them on the shelf beneath my desk. Above, I have a scratch-off map of the world, my Faeries book (which I posted on my Instagram the other day), a plant named Lila Bard, three pictures and an halfway-attempt at a Bob Ross painting that my friend had to fix for me. There’s a crown, two Danish house-shaped salt-and-pepper shakers (with no salt nor pepper to speak of), and a small lamp. My desk is relatively clean for now, but classes begin on Monday, so we’ll see if it stays that way!

My bed is surprisingly comfortable. As I mentioned before, we don’t have any air conditioning so it can be ridiculously hot, even at night- thus no comforter just yet. On the wall is my informal gallery wall of fanart and promotional material, brought to you by the grace of command strips (not sponsored, just the only thing that works in this humidity). Eventually I plan to put up more, but for now, it’s way too wet to even consider it. 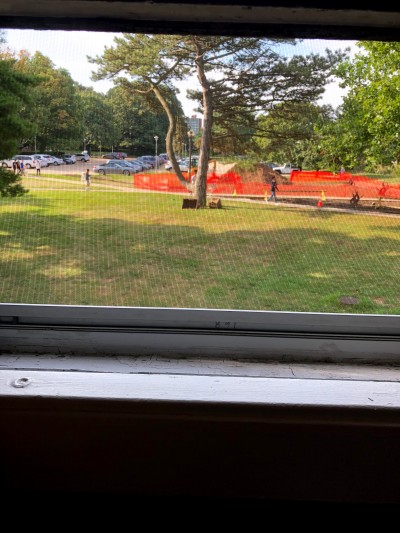 Our view is, unfortunately, that of a construction zone, but it’s thankfully not too loud. This morning, it was cool enough to keep the windows open which was quite nice as our four fans are typically working overtime. We put the plants- Julia and Irving the English Ivy and Lila Bard the succulent- on the windowsills for some fresh air and hopefully they enjoyed it…

…just as you hopefully enjoyed this tour. Hope you all are having a semi-decent Monday (it is Monday, after all), and I’ll see you in a few days!